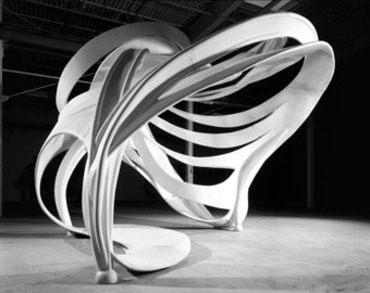 (do press-release do Met)

The first exhibition, Frank Stella: Painting into Architecture (May 1 – July 29, 2007), explores Stella's interest in architecture over recent decades. With works ranging from small models to an enormous full-scale mock-up, the exhibition demonstrates how Stella's formal concerns literally moved from painting to wall-reliefs, to free-standing sculpture that became architecture.

The second exhibition, Frank Stella on the Roof (May 1 – October 28, 2007), consists of recent monumental works in stainless steel and carbon fiber by the artist. They are displayed on The Iris and B. Gerald Cantor Roof Garden, an open-air space atop the Lila Acheson Wallace Wing that offers spectacular views of Central Park and the Manhattan skyline. This exhibition marks the tenth annual single-artist installation on the Roof Garden.

"Since his first showings in New York in the 1950s, Frank Stella has occupied an important place among New York artists and has continued to expand the boundaries of what abstract painting and sculpture can be," commented Gary Tinterow, Engelhard Curator in Charge of the Department of Nineteenth-Century, Modern, and Contemporary Art. "In these two exhibitions, we see Stella's 50-year gestation of ideas melding painting, sculpture, and architecture. Unique among the painters of his generation, he looks back to Malevich's reductive notions of Suprematism and, at the same time, looks forward to extravagant forms that have recently been popularized by architects such as Frank Gehry."

Frank Stella: Painting into Architecture
Since the early 1990s, Frank Stella has embarked on architectural endeavors that are an extension of his career as a ground-breaking painter whose work has frequently alluded to a third dimension and has increasingly taken on an architectonic aspect.  Frank Stella: Painting into Architecture explores Stella's interest in architecture over the course of his career, and his profound engagement with the designing and crafting of space over the past decade in particular, through works in a variety of media that are characteristically exuberant, expressionistic, and sculptural.

Highlights of the exhibition include Sunapee II (1966), an oil painting with – like many of Stella's other works – a shaped canvas emphasizing its object-like nature; important models such as First Model Kunsthalle Dresden (1991), which is a rendering of one building for an as-yet unrealized cultural park in Dresden, Germany; three models for Chinese Pavilion, including one in bronze from 1993, one in brass from 2005, and a 2007 (in progress) carbon epoxy composite that is displayed on the Roof Garden due to its enormous size; and a large fiberglass-and-carbon-fiber section of a building-in-progress called The Ship (20 x 26 x 30 feet).

Frank Stella: Painting into Architecture is accompanied by a 40-page, illustrated publication with an essay by Paul Goldberger. It is published by The Metropolitan Museum of Art and distributed by Yale University Press, and is available in the Museum's book shops for $16.95.

Frank Stella on the Roof
Displayed in the 10,000-square-foot Iris and B. Gerald Cantor Roof Garden, the spectacular outdoor space atop the Metropolitan Museum for large-scale sculpture exhibitions, Frank Stella on the Roof explores further the artist's recent forays in sculpture and architecture through works in stainless steel and carbon fiber.
Two of the sculptures on view, each more than 14 feet high – adjoeman (2004) and memantra (2005) – are from Stella's Bamboo series (2002-2007). Both titles can be found in the glossary of Gregory Bateson and Margaret Mead's 1942 Balinese Character: A Photographic Analysis in Balinese, adjoeman means "showing off, decorative," while memantra is a "verbal form from mantra, a prayer or incantation."

While the black of the carbon fiber harks back to the artist's early landmark Black paintings, the steel tubing has been incorporated into his more recent relief and sculptural work. The structure of adjoeman is suggestive of a sailing craft, with its base and its mastlike, boomlike features, as well as its sail-like component.  Memantra is more exuberant and improvisational, with spiraling, swooping, curving steel conduits that cradle a central molded-carbon-fiber slab, suggesting sculptural calligraphy.

Also on the Roof Garden will be Frank Stella's most recent work, Chinese Pavilion (2007), which has never before been exhibited. The structure of the piece explores the sort of leaf formation that has been one of the artist's chief architectural themes. Fabricated for the Museum's rooftop setting, this pavilion-like work-in-progress is officially part of the concurrent exhibition Frank Stella: Painting into Architecture at the Metropolitan, and serves to unite the two exhibitions.

About the Artist
Born in 1936 in Malden, Massachusetts, Stella moved to New York in 1958 after graduating from Princeton University, where he painted and earned a bachelor of arts degree in history. He garnered immediate recognition for his early and influential series of minimalist Black paintings (1958-60), in which he covered the entire field of the canvas with symmetrical patterns of bands of black paint separated by narrow interstices of unpainted canvas. Next came the 1960 Aluminum and 1960-61 Copper series of metallic paintings on shaped canvases (paintings whose shapes resulted from the serial progression of the bands, or stripes, of the composition). In the 1960s, Stella employed a wider range of paint colors and further exploited the concept of the shaped canvas in a variety of series, culminating in the Irregular Polygon paintings (1965-67) – his first with large, geometric areas of unbroken color – and the curvilinear Protractor series (1967-71). Stella embarked on a career-long commitment to printmaking in the mid-1960s.

During the 1970s – a time of dramatic change in his work – Stella introduced relief into his art (characterized as "maximalist" painting, for its sculptural qualities), initiated by the large-scale, constructed Polish Village collage-reliefs (1971-73). He then began to use aluminum as the primary support for his paintings, as in the fanciful and freely painted Exotic Birds series (1976-80) and the more exaggerated and garishly colored Indian Birds (1978-79). As the 1980s progressed, with such series as Circuit, Shards, South African Mines, Malta, and Cones and Pillars, the artist's work became increasingly baroque in character, improvisational in aesthetic, explosive with high color, and infused with energy and exuberance. With the Moby Dick series (1986-97), the progressively deep relief of Stella's paintings gave way to full three-dimensionality. In the 1990s, having consistently tested the limits of the conventions of painting, Stella began producing free-standing metal sculpture – often on a massive scale – and developing full-fledged architectural projects.

Stella lives and works in New York. He has traveled widely – to Canada, throughout Europe, and to Brazil, Egypt, India, Israel, Japan, and Russia – and his travels have been a significant source of inspiration.
In his recent work – as can be seen in both exhibitions on view at the Metropolitan Museum – Stella continues to move far beyond painting's traditional limits, working freely in three dimensions.

Posted at 01:20 in Exposições | Permalink