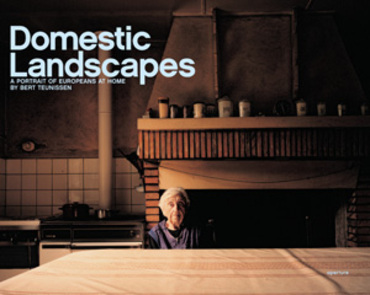 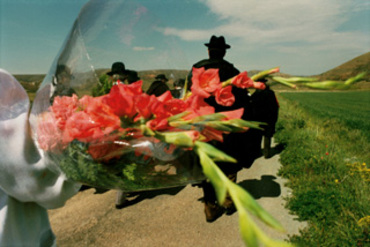 "Spain versus Holland: with the photographs of Cristóbal Hara and Han Singels, Huis Marseille is bringing Southern temperament and Northern light under its roof this summer. Cristóbal Hara has worked for over thirty years on a personally tinged oeuvre in which he fuses Spain's cultural traditions and political history with his own past and memories. Han Singels, following the lead of the classical school of Dutch painting, photographs Dutch landscapes in which cows play the leading role. Both photographers began as photojournalists, but ended up choosing another direction for reasons of their own. Now they have found themselves in alignment with the broad artistic traditions of their own countries: the expressive emotional surrealism of Hara against the subdued and cerebral realism of Singels." (Huis Marseille) 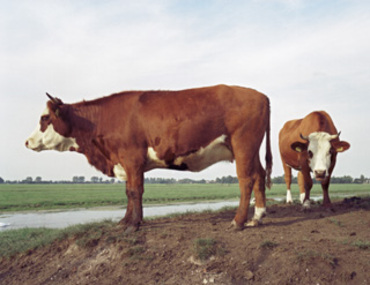 Cristóbal Hara: An Imaginary Spaniard (in Huis Marseille)
"Cristóbal Hara (Madrid, 1946) is not intrigued by the subject of a photo but by the visual realization of an image. In a unique manner, he shapes reality and blurs the boundary between fact and fiction.
The exhibition features photographs from both An Imaginary Spaniard (Steidl Verlag, 2004) and his latest publication Autobiography (Steidl Verlag, 2007). In his wandering through Spain, Hara works like a photojournalist on an assignment, but the photographs gain new meaning because he presents them in a different context. An Imaginary Spaniard does not illustrate the life of one specific Spaniard, but rather the cultural identity of Spain in general, an imaginary Spain. Hara has made a satirical photo story in which he considers traditional Spanish concepts such as God, authority, sin sexual repression, hell, macho culture and the seductiveness of women in a manner that is both poetic and ironic."

Cristóbal Hara was born to a German mother in Madrid in 1946 and grew up in the Philippines, the USA, Germany and Spain. He studied law and business administration in Madrid, Hamburg and Munich before deciding in 1969 to become a photographer. After a few years in London (and a 1974 exhibition at the Victoria & Albert Museum), he moved to Spain in 1980. His photographs have appeared in magazines such as Creative Camera, Aperture and Du and in Spanish magazines and newspapers such as El País. Until 1985, he worked exclusively in black and white and since then, only in colour. Cristóbal Hara has published several photography books. He lives in a small village near Cuenca.

Cristóbal Hara was born into a Spanish colonial family in 1946; his German mother died shortly after his birth and he spent his early childhood in the Philippines and in the USA. When he was eight years old, he was sent to a religious boarding school in provincial Spain and found himself locked into a world of perverse religiosity and sexual repression, coupled with violence and corporal punishment. This experience occurred during the middle years of the long Franco dictatorship and, although perhaps particularly traumatic to an outsider, was not uncommon to Spaniards of his generation.
Working with the wild horses of northern Spain nearly half a century later, he strongly identified with the mixture of vulnerability and rebelliousness of the ponies; the dust, the smells, the general roughness and coercion made him relive the childhood experience.

In Autobiography, the second volume of a trilogy (following An Imaginary Spaniard, 2004), Cristóbal Hara uses images taken in contemporary Spain and filters them through the emotional memories of his childhood. The result digs deep into Spanish culture and into the cultural background of his generation.
96 pp., 30€ / Amazone.fr 26.67€ (Agosto) /Kowasa

What could the cheerful woman in the middle of a crowd be looking for in that coffin? And what kind of bishop is that with the naked beauty on his cape? Cristóbal Hara’s photographs show an undiscovered Spain — far from its beautiful beaches and urban centers — with its ordinary people and animals and its very particular peculiarities. Using the techniques of straight reportage photography, they sometimes report facts which are stranger than fiction. At processions and markets, funerals and bullfights or simply on the street, Hara positions his camera to capture something from the hustle and bustle of the provinces. The photographs in An Imaginary Spaniard tell of joy, sorrow, loneliness and companionship and create their own fairy-tale world from a combination of sadness and enchantment.

"Following in the footsteps of Paulus Potter, Aelbert Cuyp, Gerard Bilders and Willem Roelofs, Han Singels (Brastagi, Indonesia, 1942) has trekked for years through the polders of North Holland, the riverbanks of Gelderland and the pastures of Utrecht in order to photograph cows in the landscape.
Whereas his illustrious predecessors went out with their sketchbooks on foot, Singels sets out with a camera on his motorbike. Light, air, water, trees, grasslands, and cows of all sorts and colours are the elements with which the painters create their landscapes on white canvas, usually in the studio, from their imaginations. As a photographer, Singels can do nothing but look, walk and wait with endless patience until the right moment arrives and all the elements combine and strengthen one another. And still, he will not know whether he has struck home until he is in the darkroom. Looking at his work, you catch a glimpse of the old Dutch Masters and their 19th-century colleagues of The Hague School in every photograph.