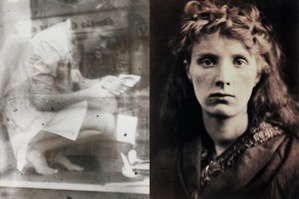 Magazin 3: "Working independent of his contemporaries from the 1960’s up to the 90’s, Miroslav Tichy (b. 1926, Czech Republic) created an idiosyncratic style, fascinating in its imperfection and reminiscent of photography’s early experimental years. Using homemade cameras Tichy took blurry, mottled photographs in his Moravian home town Kyjov. His anonymous portraits depict mothers, waitresses, students, sitting on park benches, waiting for the bus or in conversation with a friend – moments from everyday life and often framed by elaborate mounts." 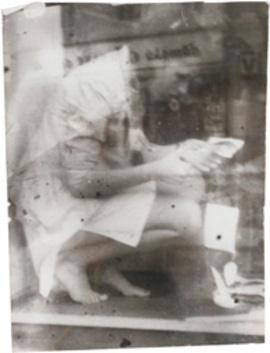 "Miroslav Tichý (b. 1926) was inspired mainly by the everyday moments of the 1960’s up to the 90’s in his Czech hometown Kyjov. The anonymous subjects in his pictures are mothers, pensioners, shop assistants, students, bathers of all ages, career women and housewives, in cafés, shops, streets and plazas, waiting for the bus, with their legs crossed on a park bench, in an intimate conversation. – anonymous portraits are a tribute to woman in many guises. The non-perfection of the photos, the haziness, the blotches and asymmetry evoke the early photographic experiments and explorations.

"While studying painting at the Academy of Art in Prague in the late 1940’s, Tichý was troubled by the totalitarianism of the era. He was constantly involved in conflicts with the communist regime that was for social realism instead of modernistic and expressionistic ideals within the arts. Step by step, he retreated from the art scene and society in general. 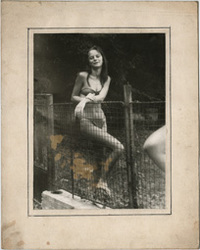 He spent several years alternately in prison and in mental institutions, and over the years he became successively more radical in his antipathy, challenging norms and contradicting society’s preconceptions of an orderly life, living in isolation as a result. But he never ceased to express himself artistically. He gave up painting and took up photography.

With simple means but with great knowledge and enthusiasm he built cameras and objectives, using cardboard, toilet rolls, bottle tops, thread spools and other materials. The lenses were made of rough-cut Plexiglas that was honed with a mixture of toothpaste and ashes. Afterwards, he processed and ‘improved’ many of his photos by filling in the motifs with a pen where he felt his composition technique was flawed. A few simple lines bring out the contours of a dress, enhance an eye or put curls in hair. His past as a painter shines through in the elaborate mounts he made for his photographs. Nowadays Tichý still lives in Kyjov but he no longer photographs. " 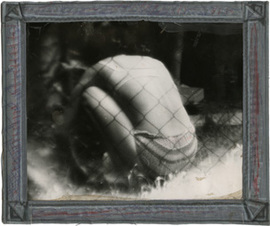 Photographic works by Miroslav Tichy were for the first time shown in a group exhibition at Die Blaue Kunsthalle in Cologne (DE) in 1990 and in 2004 at the Seville Biennale. In 2005 Kunsthalle Zürich (CH) presented Tichy’s first solo exhibition and since then his work has been shown in Canada, USA, Germany, and most recently in China. The Centre Pompidou in Paris (FR) will also host a solo exhibition in May 2008.

via e-flux , an international network established in January 1999 in New York
http://www.e-flux.com/pages/contact

Posted at 01:35 in Fotografos | Permalink