"David Goldblatt’s photographs of the last decade are an ongoing exploration of the intersections between people, values and land in post-apartheid South Africa. They develop and take into new terrain the approach underlying his major essays from the years of apartheid.

In this exhibition these continuities and developments are exemplified in two bodies of work.

In the first, photographs from essays undertaken in the years of apartheid have been paired with photographs from Goldblatt’s post-apartheid work. The tensions, congruities and incongruities to be found in these pairings speak in varying ways and layers of life here and, not least, of continuity and change in South Africa.
The second is a series of triptychs in each of which complexities of time, space and meaning surrounding a number of subjects are explored through the intricate relationships yet separateness of their three images.
Clearly revealed in both bodies of work is the connectedness of vision and thought that threads through all of Goldblatt’s photography – early and recent, black-and-white and colour.

Goldblatt has been critically exploring South African society through his photographs for more than half a century, has published a number of books and has received international recognition for his work. His retrospective, David Goldblatt: Fifty-one years, toured galleries and museums in New York, Barcelona, Rotterdam, Lisbon, Oxford, Brussels, Munich and Johannesburg between 2001 and 2005. He won the 2006 Hasselblad Award in recognition of his lifelong achievements." 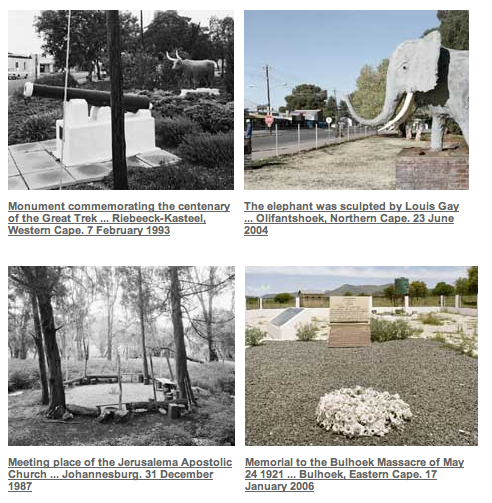 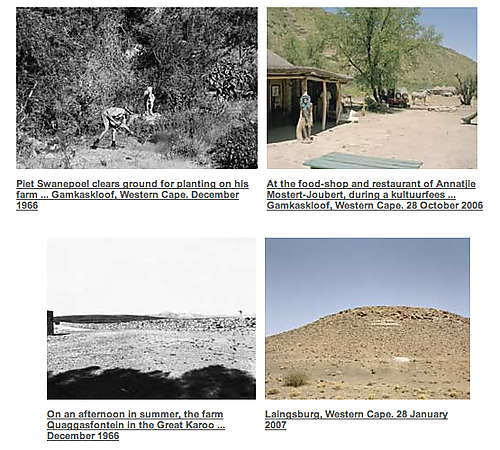 "In many African cities, there are streets, avenues and squares named after Patrice Lumumba, one of the first elected African leaders of modern times, winning the Congo election after independence from Belgium in 1960. His speech at the independence celebrations in Léopoldville, in the presence of the Belgian King, Baudouin, unequivocally signalled his opposition to the West's idea of neo-colonial order that would replace overt domination with indirect control. He was assassinated in January 1961 by Belgian agents after UN complicity in the secession of the provinces of Katanga and South Kasai, and a Western power-supported military coup led by Mobutu Sese Seko. Today his image as a nationalist visionary necessarily remains unmolested by the accusations of abuse of power that became synonymous with later African heads of state.

Guy Tillim embarked on this project as the recipient of the first Robert Gardner Fellowship in Photography granted by the Peabody Museum at Harvard University. "Avenue Patrice Lumumba" will be shown in 2009 at the Fondation Henri Cartier-Bresson in Paris, France; Foam Photography Museum in Amsterdam, The Netherlands; and the Serralves Museum in Porto, Portugal. A book will be published by Prestel.