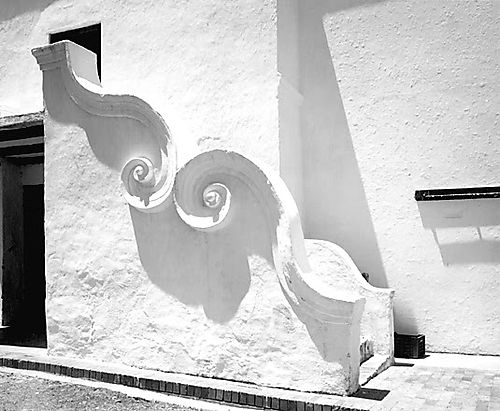 1 - David Goldblatt was born in 1930 in Randfontein, South Africa, the son of Lithuanian-Jewish parents who had fled Europe with their parents in the 1890s. He became interested in photography in high school, but found little opportunity in his chosen field of magazine photography. Discouraged, he joined the family's menswear business and began work part-time on a university degree. Following his father's death in 1962, he sold the clothing concern and began working full-time as a photographer.

2 - Born in Randfontein, South Africa, in 1930, the third son of Eli Goldblatt and Olga Light both of whom came to South Africa as children with their parents, to escape the persecution of the Lithuanian Jewish communities in the 1890's. He became interested in photography while at Krugersdorp High School and after matriculation in 1948 wished to become a magazine photographer. However the field was almost unknown in South Africa at that time and after trying unsuccessfully to enter the profession, he went work in his father's men's outfitting store in Randfontein.

"While working in the business and taking a Bachelor of Commerce degree at Witwatersrand University, my interest in photography continued and I taught myself basic skills. After the death of my father in 1962, I sold the family business and have, since September 1963, devoted all of my time to photography. My professional work has been almost entirely outside the studio and has involved a broad variety of assignments for magazines, corporations and institutions in South Africa and overseas.
My personal work since 1961 has consisted of a series of critical explorations of South African society a number of which have been exhibited and published in book form.
In 1985 the British television network, Channel 4, made and screened a one hour documentary, "David Goldblatt: In Black and White", which was subsequently shown in the USA [PBS] and Australia. I was a Hallmark Fellow at the Aspen Conference in Design, Aspen, Colorado, 1987 and the Gahan Fellow in Photography at Harvard University in 1992. In 1995 I was awarded the Camera Austria Prize for an excerpt from my essay, "South Africa the Structure of Things Then". The University of Cape Town conferred the degree of Honorary Doctorate in Fine Arts on me in 2001.
In 1989 I founded the Market Photography Workshop in Johannesburg, with the object of teaching visual literacy and photographic skills to young people, with particular emphasis on those disadvantaged by apartheid. The Workshop has been successful in creating an environment in which people of all races collaborate constructively. It operates under a full-time director and part-time teachers, six days per week from premises in the Newtown Cultural Precinct of the city, qualifying about 250 students per annum, a number of whom, having completed advanced courses, are now working as professional photographers.
In 2001 a retrospective exhibition of my work, David Goldblatt Fifty-One Years co-curated by Corinne Diserens and Okwui Enwezor and produced by the Museu d’Art Contemporani de Barcelona (MACBA), began a tour of galleries and museums which has so far taken it to New York, Barcelona, Rotterdam, Lisbon, Oxford, Brussels and Munich. It opened in the Johannesburg Art Gallery in August 2005.
In 1998 I was the first South African to be given a one-person exhibition at the Museum of Modern Art, New York, when photographs from the essay, South Africa: the Structure of Things Then, were shown. Excerpts from my photographic essays on Boksburg and on recent developments in Johannesburg were on exhibition at Documenta 11, Kassel, Germany in 2002. In 2004 the French National Art Collection acquired some 54 of my prints.
Invited in 1999 by the Art Gallery of Western Australia to participate in an exhibition entitled 'Home' and to contribute a photographic project of my choice in Australia to that show, I photographed an essay on Wittenoom, a town that had been decimated by the mining and effects of blue asbestos.
Since 1999 I have been photographing aspects of post-apartheid South Africa and exploring the use of colour photography in my personal work.
'Intersections', an exhibition of this work opened at the Museum Kunst Palast, Düsseldorf in June 2005 and is due tour to Austria and the United States. A book of the same title was published by Prestel, Munich, in June 2005."

South Africa: The Structure of Things Then, 1998
"David Goldblatt's work is about buildings and structures in the South African landscape. It is, in part, about actual structures--bricks, mortar, mud, and corrugated iron. But it is also about ideological structuring: about the mental constructs that underpinned the structures of South Africa in its colonial era and more specifically, the apartheid years, the locust years, of its recent past. What Goldblatt has done is to frame these physical structures in terms of photographic constructs which, cumulatively and compellingly, reveal the many ways in which ideology has shaped our landscape." -- Neville Dubow, "Contructs: Reflections on a Thinking Eye" in South Africa :The Structure of Things Then by David Goldblatt.

" Goldblatt worked on the Particular series for many years, and in this publication he brings together photographs of South Africa people illustrating how a small detail of a body, clothing, hair or skin can lead a viewer to make judgments about class and colour, and time and place. The book was published in five colours ... in an edition of 100 collectors' copies and 500 standard copies. Of these, 100 copies and 20 author's proofs were supplied in hand-made slip-cases, each with a 203 x 254 mm silver print, processed to archival standards, of one of four of the photographs in the book. "
Publisher: Goodman Gallery Editions, Johannesburg

"Published by Prestel to coincide with Goldblatt's solo exhibition of the same title at the museum kunst palast in Düsseldorf, this substantial publication features 92 colour photographs, an interview by Mark Haworth-Booth and essays by Christoph Danelzik-Brüggemann and Michael Stevenson. 'Intersections' is the term Goldblatt has come to use for the cross-currents of "ideas, values, ethics, postures, people and things" that he has probed for more than 50 years. This is the first extensive publication of his personal colour work and of his explorations of post-apartheid South Africa.

published by Contrasto was conceived by David Goldblatt and curated by Martin Parr. It covers a selection of Goldblatt's images divided into 8 very distinctive bodies of work: The early Icons; The Transported; In Boksburg; Particulars; South Africa: The Structure of Things Then; Painters; Municipal Office Workers and Johannesburg Streets. The publication includes an introduction by Martin Parr and essays by Lionel Abrahams and Rory Bester.
2006 | Hardcover, 256 pages

David Goldblatt: Hasselblad Award 200
In 2006, the Hasselblad Foundation selected David Goldblatt as the recipient of the Hasselblad Foundation International Award in Photography. Previous winners include: Ansel Adams, Henri Cartier-Bresson, Manuel Alvarez Bravo, Iring Penn, Josef Koudelka, Robert Frank, Cindy Sherman and Jeff Wall. This handsome book was published to coincide with the opening of an exhibition of his work at the Hasselblad Center in Göteborg and the presentation of his prize. Only previously unpublished colour images were chosen for inclusion in this book, among them triptychs from his most recent body of work.
2006 | Hardcover, 84 pages

published by Umuzi to coincide with David Goldblatt's exhibition of the same name. Between 1961 and 1968, Goldblatt photographed Afrikaners initially around small-holdings near Randfontein, next in the Marico Bushveld and then more generally. Some of the black and white photographs were reproduced in specialist magazines, but it took Goldblatt until 1975 to find a publisher for the book that he envisaged - today a much-sought-after collector's item. This new book contains all but one of the photographs reproduced in the 1975 publication (some that were previously cropped are now shown in their entirety), as well as 20 additional photographs taken at the same time.
2006 | Softcover, 240 pages
ver as fotografias e os comentários de DG:
http://www.michaelstevenson.com/contemporary/exhibitions/goldblatt/afrikaners/index.htm

"By 1968 I had assembled quite a substantial body of work. After a decade of deliberations with Sam Haskins and Barney Simon, and many rejections, one thousand copies were finally printed with the support of Murray Crawford in 1975. It didn't sell. It was remaindered for R2.50.
Then, in 2004, I visited the isolated valley of Gamkaskloof, also known as Die Hel, again, and when I got home, I looked again at the work I had done there in the 1960s. There was quite a lot that I hadn't put into the 1975 book and it seemed sufficiently interesting to merit publication now, particularly since that group of highly independent small farmers had completely disappeared. This led me to think not simply of a second edition but of an expanded book, bringing into it various other photographs from my work of that time
In the years of working on what became the 1975 book I had realised that I was not concerned to present an overview or cross-section of Afrikaner life. Nor was I engaged in some sort of photographic popularisation of 'The Afrikaners'. I wanted a tightly focussed essay without fat. So in the final version I included very little of my photography on Afrikaner professional, business and 'cultural' life. People in those circles had acquired values that were not then my primary interest, as well as a self-protective gloss that diluted or obscured the core of my concerns: life and values among mainly working and farming people.
The re-issued book (and exhibition) is more expansive, less concentrated, than the first. I have omitted one photograph from the original collection and added 21 others taken in the same period. This exhibition is the first occasion that these photographs have been seen in their entirety, about forty years after they were taken. I now no longer feel the anger, fear and disgust that I had then felt at what was being done to South Africa."