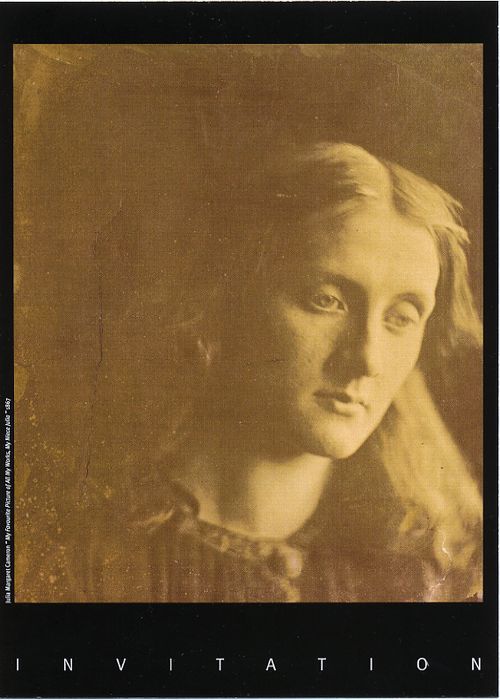 Julia Margaret Cameron, "My Favourite Picture of All My Pictures, My Niece Julia", 1867 "Women photographers have shone in the medium since the birth of photography in 1839.  When the botanist Anna Atkins (1799-1871) published her scientific study of algæ illustrated with photographs, British Algae, Cyanotype Impressions, in 1843/53, it actually predated, by a year, the appearance of William H. Fox Talbot’s The Pencil of Nature (1844/46), long considered to be the first photographically-illustrated book. Julia Margaret Cameron (1815-1879) took up the camera at the age of 47 and, more or less single-handedly, invented the art of the photographic portrait. In fact, it can be argued that women photographers are preeminent at any time in the history of the medium, working in all genres and styles. It is impossible to discuss pictorialism without taking into account the work of Gertrude Käsebier (1852-1934) or Anne Brigman (1869-1950), as it is unthinkable to discuss modernism without Imogen Cunningham (1883-1976) or Florence Henri (1893-1982). In the documentary style, Dorothea Lange (1895-1965) is the equal of Walker Evans (and there are another 7 important women photographers associated with the Farm Security Administration/Office of War Information projects).
In Portugal, the formidable research carried out by Maria Lamas (1893-1983), in the late 1940s, for her epic work on The Women of My Country (1947/48), is as much photographical as it is anthropological and sociological. Mexican photography is dominated by women photographers, from Tina Modotti (1896-1942) and Lola Álvarez Bravo (1897-1993) to Graciela Iturbide (n. 1942). Several women have influenced and shaped the language of photography – Claude Cahun (1894-1954), Lisette Model (1901-1983), Margaret Bourke-White (1904-1971), Diane Arbus (1923-1971), Sarah Moon (b. 1940), Francesca Woodman (1958-1981) and Cindy Sherman (b. 1954), to name but a few. Lee Miller (1907-1977) discovered solarization by accident – a technique later explored by her lover, Man Ray.
Despite all this, in 1989, when the 150th anniversary of the invention of photography was celebrated worldwide, women did not receive their fair share of credit: only 4 women – out of a total of 97 photographers – were included in The Art of Photography 1839-1989, at the Royal Academy, in London. Likewise, at the National Gallery of Art, in Washington, D.C., the gigantic show On The Art of Fixing A Shadow featured only ten per cent of women photographers.

Working within a male establishment in a male-dominated society, women had to have extra energy and ambition and take more risks in order to succeed as photographers. The emergence of  a chauvinistic male curatorial power, both in the United States and Europe, in the post-war period, did little to improve the visibility of women photographers. It is only in the last decade or so, that women attained full status – if not complete equality – in the photographic scene.

Au féminin is a contribution towards redressing the balance. The purpose can be that stated by Ruth Bernhard (1905-2006), who claimed that her vision was “To raise, to elevate, to endorse with timeless reverence the image of woman”. There have been several exhibitions and publications on women photographers, but this is, as far as we know, the first major exhibition entirely devoted to femininity, in both object and subject. Not only all the artists are women, but the theme is also womanhood in all its richness and variety.
Eudora Welty defined the camera as “a hand held auxiliary of wanting to know”. Women photographers probably know better because of all the obstacles laid out on their path by a male-controlled and organized society. This is undoubtedly a loaded question, but it is significant that a satirical feminist like Mrs. Edith Middleton – known, as a photographer, as Madame Yevonde (1893-1975) – could say that “Women as a rule make better photographers than men, possessing to a greater degree [...] personality, tact, patience and intuition”. The curator, however, tends to think that visual intelligence and curiosity are neither female or male. As Imogen Cunningham said, “photography has no sex”. She lived to be over ninety and was wise and full of humour.

Curated by Jorge Calado, the exhibition Au féminin shows the work of about 100 women photographers from all over the world (Australia, Asia, North and South America, Africa, Europe), covering the whole history of the medium in all genres, from the 1850s to the present. In other words, a story of photography conjugated in the feminine by a male curator. The various sections of the exhibition – The Ages of Woman, Portraits, Stars and Goddesses, Motherhood, Work and Leisure, In the City, Shopping and Fashion, Fictions and Metaphors, Nature – are a testimony to its variety. But ultimately, Au féminin is a show of photographic images, not a political essay on their creators.
The exhibition opens in Paris at the Centre culturel Calouste Gulbenkian (51, Avenue d’Iéna, 75 116 Paris) on  June 23, 2009 (through September 29). The exhibition is dedicated to Maria do Carmo Vasconcellos, Coordinator of Cultural Projects at the Centre, who retires later this year.