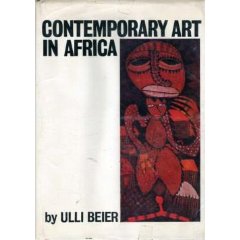 "An important early survey of contemporary African art focusing on the new artists, that is, those working in non-traditional modes and settings. Covers all the new schools of art with particular emphasis on Beier's own experience with the Oshogbo artists." Reviewed by E. Okechukwu Odita in Africa report (New York) January 1970, pp. 39-40. in Modern African Art : A Basic Reading List General Surveys and Critiques - http://www.sil.si.edu/SILPublications/ModernAfricanArt 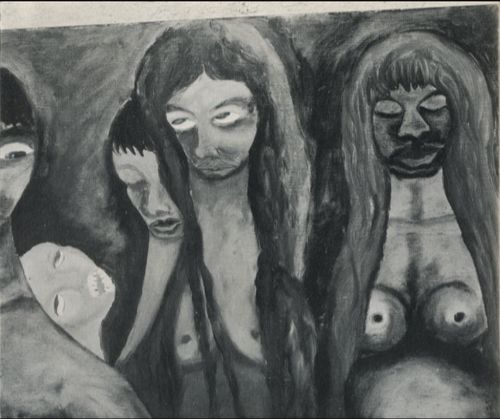 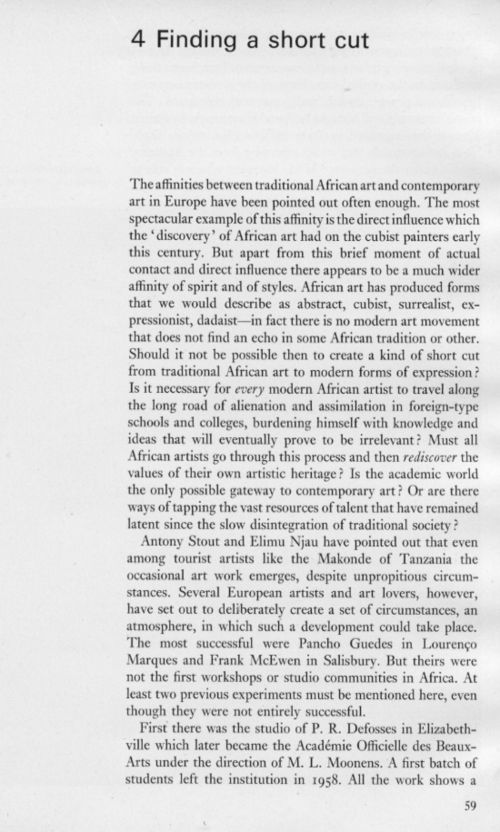 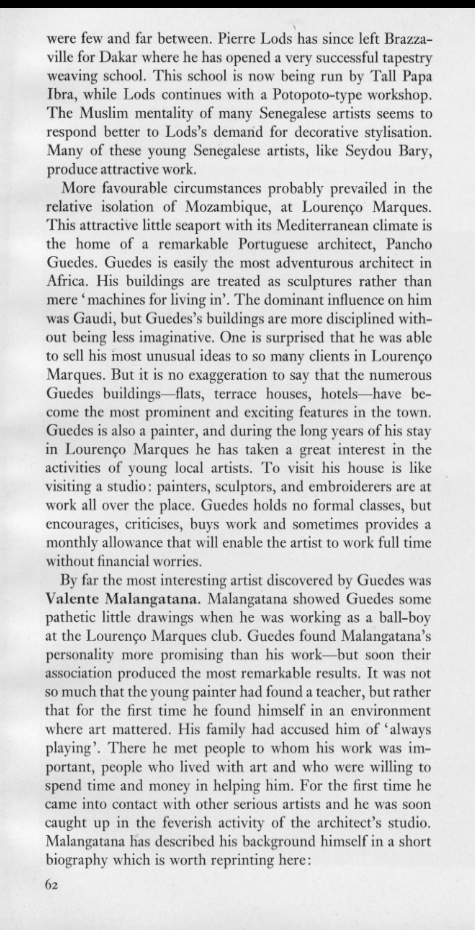 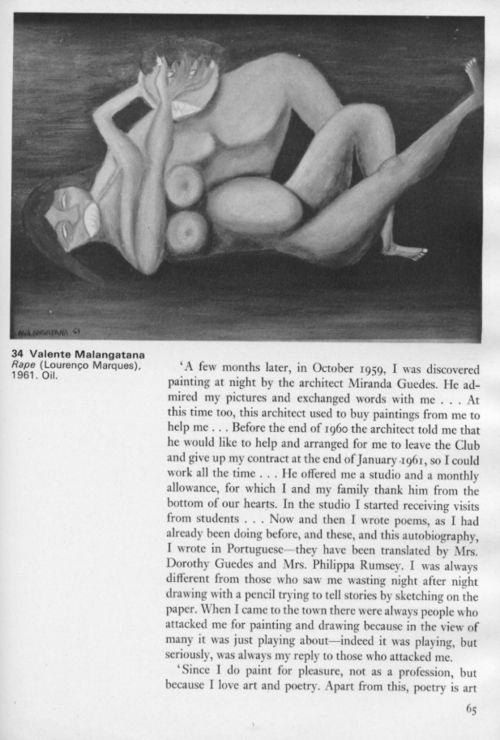 "Several European artists and art lovers, however, have set out to deliberately create a set of circumstances, an atmosphere, in which such a development could take place. The most successful were Pancho Guedes in Lourenco Marques and Frank McEwen in Salisbury. But theirs were not the first workshops or studio communities in Africa. At least two previous experiments must be mentioned here, even though they were not entirely successful. (First there was the studio of P.R.Defosses in Elizabethville whch later became the Académie Officielle des Beaux-Arts..." "Mutch more famous was a similar experiment carried out by the French painter Pierre Lods in Potopoto, a colourful suburb of Brazzaville. (...)" (pág 59-60)

"(...) More favorable circumstances probably prevailed in the relative isolation of Mozambique, at Lourenco Marques. This attractive little seaport with its Mediterranean climate is the home of a remarkable Portuguese architect, Pancho Guedes. Guedes is easily the most adventurous architect in Africa. His buildings are treated as sculptures rather than mere machines for living in'. The dominant influence on him was Gaudi, but Guedes's buildings are more disciplined without being less imaginative. One is surprised that he was able to sell his most unusual ideas to so many clients in Lourenco Marques. But it is no exaggeration to say that the numerous Guedes buildings - flats, terrace houses, hotels - have become the most prominent and exciting features in the town. Guedes is also a painter, and during the long years of his stay in Lourenco Marques he has taken a great interest in the activities of young local artists. To visit his house is like visiting a studio: painters, sculptors, and embroiderers are at work all over the place. Guedes holds no formal classes, but encourages, criticises, buys work and sometimes provides a monthly allowance that will enable the artist to work full time without financial worries.

By far the most interesting artist discovered by Guedes was Valente Malangatana. Malangatana showed Guedes some pathetic little drawings when he was working as a ball-boy at the Lourenco Marques club. Guedes found Malangatana's personality more promising than his work - but soon their association produced the most remarkable results. It was not so much that the young painter had found a teacher, but rather that for the first time he found himself in an environment where art mattered. His family had accused him of 'always playing'. There he met people to whom his work was important, people who lived with art and who were willing to spend time and money in helping him. For the first time he came into contact with other serious artists and he was soon caught up in the feverish activity of the architect's studio. Malangatana has described his background himself in a short biography which is worth reprinting here: (...)" (pág. 62)

Malangatana (pág. 65): "A few months later, in October 1959, I was discovered painting at night by the architect Miranda Guedes. He admired my pictures and exchanged words with me ... At this time too, this architect used to buy paintings from me to help me ... Before the end of 1960 the architect told me that he would like to help and arranged for me to leave the Club and give up my contract at the end of January 1961, so I could work all the time ... He offered me a studio and a monthly allowance, for which I and my family thank him from the bottom of our hearts. In the studio I started receiving visits from students ... Now and then I wrote poems, as I had already been doing before, and these, and this autobiography, I wrote in Portuguese - they have been translated by Mrs. Dorothy Guedes and Mrs. Philippa Rumsey. I was always different from those who saw me wasting night after night drawing with a pencil trying to tell stories by sketching on the paper. When I came to the town there were always people who attacked me for painting and drawing because in the view of many it was just playing about - indeed it was playing, but seriously, was always my reply to those who attacked me.
'Since I do paint for pleasure, not as a profession, but because I love art and poetry. Apart from this, poetry is art ..." (pág 65)

"M. may have been the first African artist to find the short cut - to become a sophisticated artist while bypassing education." (pág. 72)

(pág. 75) "5. The great excitement
The charming and attractive town of Lourenco Marques seems an appropriate setting for the emergence of new African artists. Not only do Pancho Guedes's buildings serve as a constant inspiration but there is a lively African community which paints the walls of its shantytown shacks with delightfully playful designs. Even if the charm of these popular paintings is very superficial, they are an indication of the reserves of talent waiting to be tapped.
On the other hand, Salisbury, the capital of Rhodesia, is a town so deadly bourgeois, so painfully respectable and sterile, that any form of artistic activity comes as a complete surprise. There is no Pancho Guedes there to break the monotony of the matchbox skyscrapers that dominate the boom town. The African' locations' are perhaps slightly less poor, but they are rather more depressing than those of Lourenco Marques. The fact that this town became the scene of the largest and most successful art workshop in Africa is due entirely to the activities of one man: Frank McEwen, director of the Rhodesian National Gallery. McEwen had spent thirty years in Paris, some of them as délégué des beaux arts of the British Council. Few people were so closely connected with the great painters of this century. Picasso, Braque, Brancusi, and many others were among his personal friends. In 1957 he suddenly decided to leave his high-powered job in Paris and accepted the invitation to become director of the Rhodesian National Gallery in Salisbury. His real job was to administer the Gallery, which had a permanent collection of European old masters, and to import occasional exhibitions from Europe. The bewildered Rhodesians were subjected to a huge Henry Moore exhibition and to a rare collection of medieval French tapestries.

But this did not satisfy McEwen. He felt that the Gallery should serve the African community as much as the European one and he did not rest until school children and adults from the locations were among the regular visitors to the Gallery. " (pág 75) 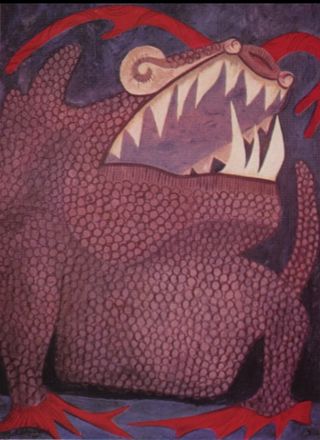 "(...) The artists were discovered - almost systematically - in a series of summer schools, and they were later grouped in permanent workshops. The idea of summer schools was actually pioneered in Lourenco Marques by Pancho Guedes and his South African architect friend Julian Beinart. During a visit to Lourenco Marques I saw the fascinating results of their first experimental school held in I960 and I was able to have them invited to Ibadan in I96I where they held a first school at Mbari Ibadan. In I962 Julian Beinart returned for a second school, but this time he was assisted by the West Indian painter and scholar Dennis Williams. (pág. 104)

Beinart's summer schools were primarily held for practising artists and art teachers. Their purpose was to shock people out of their conventional attitudes, to make them understand the mechanics of painting, and to teach them to see form dissociated from literary content and worn-out imagery. He achieved this result in a number of ways. He made the students work in unconventional media and he taught them to treat art with a kind of healthy disrespect. Paint was dribbled, sloshed and slapped about. Cement, all kinds of scrap, bottletops, sand, wire-anything that happened to be at hand-would be used. In a series of violent exercises the students were made to 'play themselves free', to lose their inhibitions and gain new vision. Beinart achieved surprising results because his own feverish energy and inspired enthusiasm carried everyone with him into a state of euphoria and creative activity in which people shed all preconceived ideas about art and beauty." (105)

(pág. 131) " 9 Metamorphosis
In Lourenco Marques, Salisbury and Oshogbo, as we have seen, the meeting of European and African artists sparked off new creative activity and new schools' of painting, if not movements. The process can be seen as a kind of reversal of the stimulus that went out from Africa around I906-I907 when Vlaminck, Derain and Picasso discovered' African sculpture and derived entirely new ideas from the encounter. It is possible to distinguish some general characteristics that the Lourenco Marques, Salisbury and Oshogbo schools have in common. It would be a mistake to put this down simply to foreign ideas being adopted or accepted indiscriminately. An artist can only digest congenial material. African woodcarvings, for example, were seen by many European artists, but only a handful responded to the stimulus and were enriched by the experience. Similarly, it is a certain type of African talent that is attracted to a certain type of foreign stimulus. A European artist, living or working in an African town, will respond to certain artists, but will fail to create an ambiance with others. Thus the different schools or movements are related to the personality of the artist who served as the catalyst, but they were not made by him. " (pág. 131)