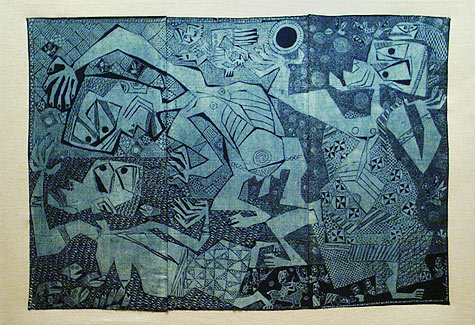 "With this exhibition, Okwui Enwezor encompasses the many faces of African Modernism and redefines Africa's place in the annals of 20th century history." (...) "The question which runs through the whole exhibition is this one: how can African modernism realise its modernity? This issue is neither based on the ideology of a definition of artistic periods valid for all African regions and styles, nor is it based on mere recognition of and assimilation of an autonomous European modernism" . press release: http://universes-in-universe.org/eng/specials/2001/the_short_century/press_release

"This ambitious curatorial project seeks to document the arts of Africa as the colonial era metamorphosed into the postcolonial, as liberation movements and nationalism transform the political landscape from colonies to independent nations and more political turmoil. The terminus of 1994 marks the last holdout - the demise of apartheid South Africa.

The visual arts, graphics, photography, music, literature, drama, cinema, and architecture were all shaped and inspired by these momentous political events. Essays by a wide range of participants and scholars address each of these themes. Historical documents, manifestos, and speeches of African political and cultural leaders are reprinted as part of the official record of "the short century." More than fifty visual artists are represented. "Lagos is one of Africa's most vibrant and diverse cities. Since the late nineteenth century, its importance as a trading centre has attracted a unique mix of peoples from across Nigeria and the rest of West Africa. The years 1955-70 were an extraordinary period in the life of the city. Nigeria was moving towards and celebrating independence from British rule, which it achieved in 1960.

In Lagos, this energy was manifested in a self-confident popular culture, symbolised in our exhibition by Highlife music. Literature and the visual arts also thrived at the Mbari Writers and Artists Club, established in 1961 by a group of Nigerian artists, actors, musicians, designers and writers. In the words of one of its most famous members, the writer Chinua Achebe, the club was 'a theatre in which to do battle'. Here politicised artists and intellectuals sought to shape a new post-colonial identity for Nigeria. Highlife music also reflected an incipient African nationalism, although it incorporated the sounds of Cuban rumba and Latin music. This process of fusion and exchange was one of the essential ingredients of Nigerian modernism. The coups of 1966, followed by the long Biafran civil war, ended this decade of optimism and caused many artists to flee the country.

Mbari Writers and Artists Club: Artistic activity coalesced around the Mbari Club, founded by a diverse group of artists, writers, musicians and actors in the neighbouring city of Ibadan. Their intention was to develop a strong artistic identity for the new nation, celebrating Nigerian traditions while drawing on elements from other cultures. Mbari was an international environment, attracting artists from across Africa and beyond. Amongst the foremost visual artists associated with the group were Nigerians Bruce Onobrakpeya and Uche Okeke, the British artist Georgina Beier and the African American painter Jacob Lawrence, all of whose works are featured in the exhibition.

Literature: Mbari played a major role in the birth of modern African literature. Following the publication in 1958 of his first book, Things Fall Apart, a study of the impact of colonialism, Chinua Achebe was hailed as 'the father of the African novel'. Drawing on the unique linguistic and narrative style of the Igbo, he created a new approach to the novel since, he later explained, 'The standard English of Dickens and other writers we read could not tell the story I wanted to tell'. Another leading member of the group, the future Nobel laureate Wole Soyinka, was the founder of Masks, one of the first professional theatre companies in the country. In just two years, between 1963 and 1965, he produced five theatrical works that would earn him a reputation as Africa's foremost playwright. Black Orpheus magazine, co-founded by German academic Ulli Beier (the husband of artist Georgina Beier), provided a forum for writings from across Africa and its diaspora.

Malangatana Ngwenya, The Story of the Letter in the Hat A)The husband departs for work carrying his wife's hidden letter to her lover, 1960, D and A d'Alpoim Guedes, © The artist 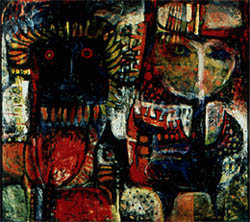