WEIGHING THE COST OF PIN-MAKING
Ulli Beier in Conversations

Edited with an Introduction by Remi Omodele


Conducted in a chatty style, these interviews evoke that quintessential Yoruba characterization of a jamboree of geniuses: Iwo le jo, emi le lu… (an accomplished dancer encounters a master drummer...). How fortunate indeed that Beier succeeds in documenting the thoughts of some of the world’s brightest minds not only on the issues pertaining to Africa, but, perhaps most importantly, the whole world—and Africa’s place in it!

Conversations covers a gamut of subjects which—even when personal—shed profound light on Africa’s past and future. The question of identity looms, and Soyinka and Salahi (“Identity”) tackle it forcefully. Salahi shares personal experiences as an artist and a practicing Muslim in and out of Africa, and his stories resonate. The average African can relate to encounters with prospective landlords or employers for whom identity invariably poses a dilemma. What is remarkable is how the speakers in this volume constantly find that they can rely on traditional African ideals to navigate life’s treacherous waters or to bridge egregious gaps. Thus Soyinka (“Orisa Liberates the Mind”) is unequivocal in his belief that the humane tendencies enshrined in Africa’s ancient religious traditions—though maligned by colonizing agents and jettisoned by many today—possess the key to a dignifying and rational life. Jeyifo’s “Desperate Optimism” shows how wherever the traditional tendencies are still embraced, we can glean the hospitality and integrity described glowingly indeed by erstwhile Arab and Western visitors to the so-called Dark Continent.

Some of the character-building mechanisms responsible for the aforementioned solid humanity are described by Abiodun (“Yoruba Values”, “Yoruba Women”) and Oluwole (“The Making of a Philosopher”). These pieces showcase, inter alia, how placing the child at the center of communal life makes parenting joyful and advantageous to all involved; how sharing lightens the enormous task of caring for the child and the elderly; how in this environment the child thrives, and a cycle of sustainable life builds.

In “Iconography of Order and Disorder”, “Process of Rediscovery”, and “Reflections”, Beier and his guests delineate the prevalence and benefits of two vital elements of traditional life: the immeasurable power of women and the place of broadmindedness and wisdom. The women’s leadership acumen constantly impresses Beier while the Olorisa’s open-mindedness leads him to conclude categorically that whereas “…Christian sects fight each other [and] antagonism between Muslims and Christians is on the rise, [Africans] enjoyed ecumenical ideas long before anybody had coined [the] word...” Achebe (“The World is a Dancing Masquerade”) provides an aptly corroborating metaphor for the versatility Beier describes.

Were it possible to distill this volume’s essence, it would be its focus on wisdom as an agent of equilibrium and social harmony—two elusive commodities in today’s world of growing intolerance and tension. As an antidote, Beier recommends “the tolerance of Yoruba religion, its understanding of human weakness, its way of creating harmony, and its respect for the individual. Above all, [Beier puts]…across to any new generation—whether in Asia or Europe—the notion that we become good members of a community, not by obeying a set of abstract laws, but by fulfilling our own potential and developing … [our] talents…”

ABOUT THE EDITOR
REMI OMODELE studied Theater Arts at Ibadan, Lund and UCLA. She has taught and directed plays at Calabar, Osaka Gaidai and U.C. Berkeley where she enjoys occasional stints as Visiting Associate Professor. Some of her essays on Theater Arts have appeared in African Studies Review, Ufahamu, UCLA, The Osaka University of Foreign Studies Journal, Women’s History Review, Routledge Press and Themes in Drama, Cambridge University Press.

The Oxford Encyclopedia of African Thought - Volume 1 - Page 146 - Google Books Result
books.google.pt/books?isbn=0195334736
F. Abiola Irele, Biodun Jeyifo - 2010 - Social Science
His colleagues and admirers refer to him as “Blackman in white skin” and “German-born Yoruba man.” He was known as the “white African” who defended ... 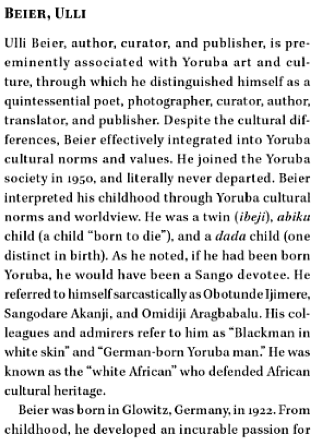 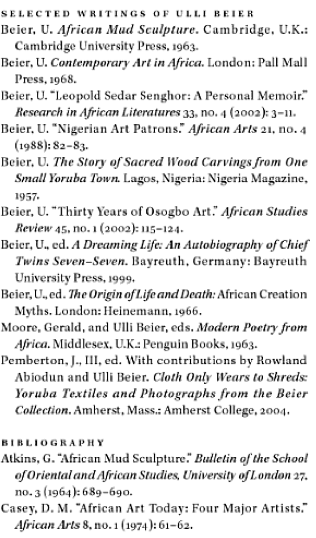 (born July 30, 1922, Glowitz, Ger.—died April 3, 2011, Sydney, Australia), German-born scholar who brought a profound new understanding and appreciation of African art and literature as the founder (1957) and coeditor (1957–68) of the Nigerian literary periodical Black Orpheus, which provided a previously unavailable outlet for creative writing by Africans and West Indians. After completing his studies at the University of London (B.A., 1948), Beier was appointed (1950) associate professor of extramural studies at Nigeria’s University College, Ibadan (now the University of Ibadan).

In 1961 he helped a group of young writers in Ibadan and Oshogbo (where he lived) organize the nonprofit Mbari Mbayo Club, which eventually encompassed an art school, a theatre, and a publisher. In the late 1960s Beier accepted a teaching position in Papua New Guinea, where he established the literary periodical Kovave. He returned to Nigeria in 1971 to become director of the Institute of African Studies at the University of Ife. Three years later he became the first director (1974–78) of the Institute of Papua New Guinea Studies in Port Moresby.

He was also the founding director (1981–85, 1989–96) of the Iwalewa House at the University of Bayreuth (Ger.) Africa Centre. Beier’s books include Art in Nigeria (1960), Black Orpheus: An Anthology of African and Afro-American Prose (1964), African Poetry: An Anthology of Traditional African Poems (1966), The Origin of Life and Death: African Creation Myths (1966), Three Nigerian Plays (1967), Introduction to African Literature: An Anthology of Critical Writing from “Black Orpheus” (1967), When the Moon Was Big, and Other Legends from New Guinea (1972), Words of Paradise: Poetry of Papua New Guinea (1972), and Yoruba Beaded Crowns: Sacred Regalia of the Olokuku of Okuku (1982). He was particularly admired for his English translations from Yoruba, including Yoruba Poetry: An Anthology of Traditional Poems (1970) and Yoruba Myths (1980).