"David Hockney: A Bigger Picture is devoted to a single genre: landscape. It came about after the artist showed Bigger Trees near Warter – a gargantuan landscape covering 50 canvases that is now in the collection of the Tate – at the Royal Academy Summer Exhibition in 2007. After it caused a splash, the RA offered Hockney the full suite of main galleries for a show of landscapes. The resulting exhibition contains more than 150 works, mostly created within the past decade.

Many were painted outdoors and depict the countryside around Bridlington, the small Yorkshire seaside town where Hockney has lived for seven years. There are bright oil paintings of wheat fields and tree-lined country lanes. There are multi-canvas vistas of woodland seen in different seasons. There are watercolours of hedgerows and haystacks, charcoal sketches of copses and logs, and more than 50 colourful “drawings”, created using an iPad and printed on to paper, documenting the onset of spring along an old Roman road that runs out of Bridlington. There are even nine - and 18- screen video works The colours are citrus-sharp.

You would be forgiven for asking: what happened? After all, Hockney is best known as the raunchy Californian sensualist who painted sun-kissed boys gliding through the azure swimming pools of Los Angeles in the Sixties. The radical has come over all conservative. I could happily have done without the watercolours recording midsummer in east Yorkshire in 2004, or the suite of smallish oil paintings from the following year.

Perhaps it’s a generational thing, but I don’t understand paintings like these. Fresh, bright and perfectly delightful, they are much too polite and unthinkingly happy for my taste: if they offer a vision of arcadia, it is a mindless one. Moreover, they resemble the sorts of landscapes that we expect from amateur Sunday painters. Hockney is anything but that – yet whatever game he is playing here eludes me.

The memorable pictures are those in which the prevailing note isn’t cheeriness, but something much stranger, more ferocious and intense. There is a room full of paintings of hawthorn blossom. It looks like a patisserie in which someone has run amok.

Another series, Winter Timber and Totems, introduces a touch of foreboding and forlorn melancholy. Thanks to the preternatural colours, the scene feels uncanny, suffused with the intensity of a vision.

Paintings such as Winter Timber go beyond mere topographical record, and remind us of the power of Hockney in his prime. For me, though, it feels as if the artist succumbed to a moment of hubris when he agreed to fill the Royal Academy’s grandest galleries with so many pictures. But for all that, there’s no doubt that A Bigger Picture will be insanely popular, giving a great deal of pleasure to a great many people.

Hockney e as árvores do Yorkshire 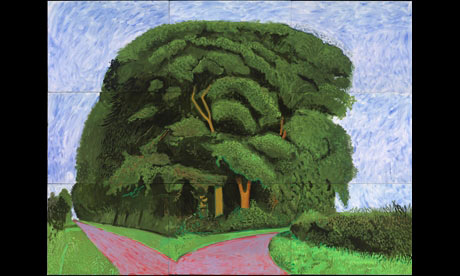 David Hockney, Trees near Warter, 2007. Oil on 50 canvases, 15 x 40 feet overall.  The man at the left with the walking cane is Hockney himself. (foto retirada de www.nature.com ) 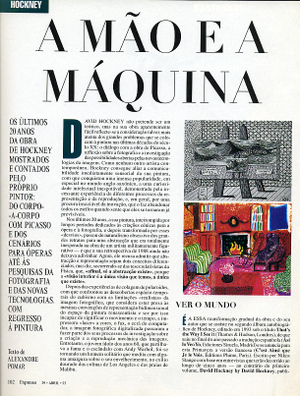 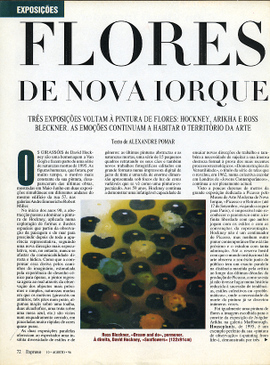 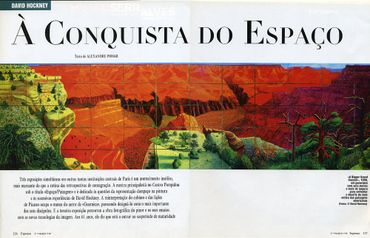